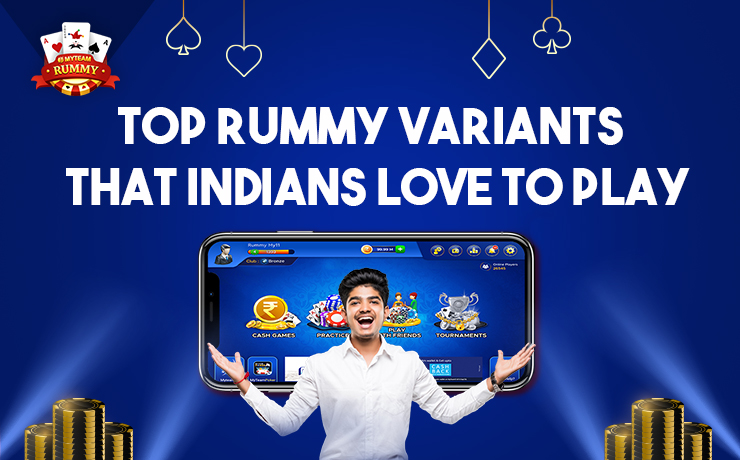 Rummy is a 13 card game that is played across India for a long time. There are a number of variants of the game available worldwide, each enjoying its own share of popularity. However, talking about India, the 13-card rummy game also known as Indian Rummy. The various variations of this game are keeping people more engaged and excited about it and this is one of the biggest reasons for Rummy getting more fame and popularity. Each variation follows different rules and different gameplay. We can play this game with 2 decks of cards and in between 2 to 6 players.

There are four different variants of the 13-card rummy game that are prevalent among people. Here, in this blog, we will tell you about the top rummy variants that Indians love to play.

If you want to enjoy the thrill of playing the rummy game within a short span of time, then points rummy is the best suitable option. Recognized as the fastest rummy variant, the game is very popular among players. Maximum 6 players can play at a time. Most players prefer this particular gaming variant because of its swiftness. Along with this, the chances of winning are quite higher as compared to other variants of the game.

Before the start of the game, a fixed rupee-value is assigned to each point. It is further used to count the winnings in case of pay-to-play contests. The rate at which the cards are selected or retained to form sets and sequences is so fast that you have to always keep your mind and brain alert. Within a few rounds, the game will usually culminate.

Pool Rummy is another interesting and exciting variation of Indian Rummy. Before beginning the game, all the players on the table, pay a certain amount that is further used to create the prize pool of the game. In pool Rummy, there are no such fix rounds, the game can go for multiple numbers rounds. It works on the concept of elimination.

The players have to avoid reaching to score of 101 or 201 points based on the pool rummy variant chosen. It consumes much more time than points Rummy but the elimination factor develops the thrill among the players. The one that remains on the table till the end is considered as the winner. Friends and family can enjoy this game together.

Another skill-based Rummy variation of Indian Rummy is Deals Rummy. In Deals Rummy, the players play the gaming round for a pre-defined number of deals. In this game variant, an equal number of chips are distributed to all the players for playing the game. The players can play for 2,3,4, and 6 deals.

The player who withholds the maximum chips in hand at the end of the final deal is declared as the winner. This game is time-consuming but it is perfect for the one who wants to spend their leisure time and can be a good companion for travelers.

Raise Rummy is sort of an extended version of points Rummy. Here, the monetary value keeps on increasing after every regular interval. If you wish to enjoy the feeling of excitement, then you should opt for Raise Rummy. In Raise Rummy, the rupee value of points increases to a pre-decided value at regular intervals during the gameplay.

So, above are the top 4 Rummy variants that Indians love. Let us know in the comments below which is your favorite.