What are the Different Rummy Variants Available on MyTeamRummy? 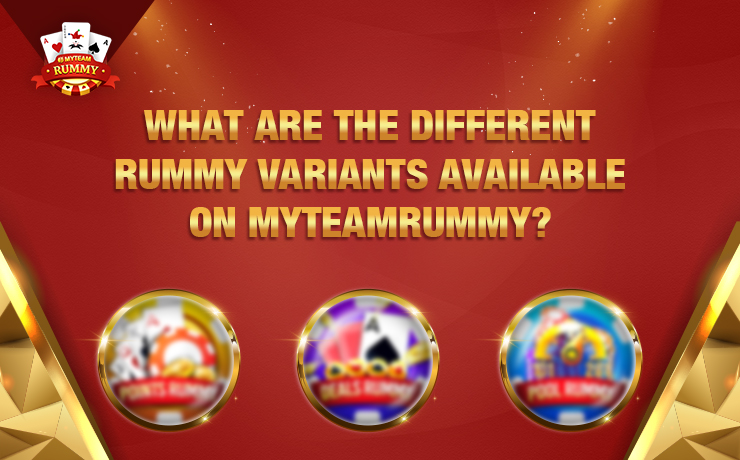 The digital presence of rummy games has brought a lot of attention to the game, with people taking a lot of interest in it. Online rummy games available on different platforms have become the preferred entertainment means for the majority of the population as it can not only be played from the comfort of their home, right at their fingertips but is also very rewarding.

The rummy game comes with a number of variants that can be enjoyed by users. But, the most popular type of rummy that is enjoyed by players in India is the 13-card Indian rummy game which is further divided into sub-variants. The best online rummy sites in India offer most of these variants, but it is very difficult to find all the entertaining variants of the game on one platform. However, the MyTeamRummy app offers more than 3 variants & sub-variants of the game.

Points rummy is the most commonly played variant of the game. The game is the most preferred among newbies who are still trying to get familiar with the game. This is the shortest rummy variant as it ends in a single round. The game can be played between 2-6 players & the objective of the game is to declare with 0 points. In this variant of the game, every point comprises a rupee value which is decided before the starting of the game round. The rupee value is used to define the entry fee for each player on the table as well as the prize for the winner. There are further sub-variants of the points rummy game on MyTeamRummy which include:

13 Cards – Played with 13 cards being dealt with each of the players on the table. The objective is to arrange the dealt cards in valid sets & sequences and declare with 0 points.

7 Cards – Very similar to the 13-card variant, with the only difference being that each player on the table is dealt 7-cards each, required to be arranged in sets & sequences.

2 Jokers – In this version of the game, the players get to play with 2 wild jokers & a printed joker while all the variants have 1 wild joker & 1 printed joker. The second wild joker in this game gets activated after all the players on the table have played 3 chances each.

Another rummy game variant that you can enjoy when you play rummy games online on the MyTeamRummy app is Pool Rummy. This game is played between 2-6 players, in multiple game rounds until only 1 player is left on the table which is declared as the winner. In this variant, the players can play the game only until they do not reach the highest pool rummy, which varies as per the pool rummy variant chosen. In case, a player reaches the highest pool rummy limit, he/she is eliminated from the table & the game moves to another round. There are 3 sub-variants of the pool rummy game offered on MyTeamRummy which can be defined as:

Here in, the digits 51, 101 & 201 represent the highest pool rummy limit that a player on the table can achieve.

In the deals rummy variant of the game, the players play for a pre-defined number of deals that are decided before the starting of the game round. In the deals rummy variant, the players play for & with chips, starting each game round with a certain number of chips. The game can be played between 2-6 players with 13 cards being dealt with each player & the objective of the game is to arrange the dealt cards invalid sets and sequences. At the end of each deal, the winning player gets the chips lost by his/her opponent & at the end of a deals rummy game, the player with the most chips, is declared as the winner of the game.