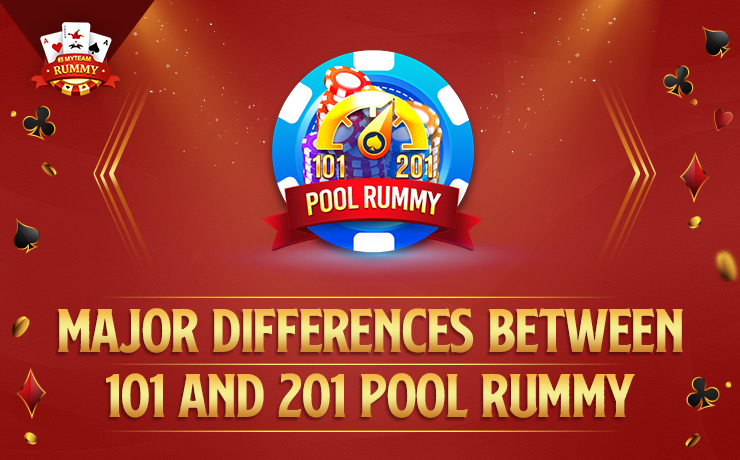 If an individual loves to take risks and enjoy dealing with them, then the Pool Rummy is the game for them. This game is played between 2 to 6 players and with 2 decks of cards each including 2 jokers.

Basically, in this type of Rummy variant, you have to stop yourself from reaching the Pool of 101 or 201. It depends on the variant you have opted for. The one who reaches the pre-defined limit, i.e., 101 or 201, is eliminated from the game. To maintain your score below the limit is a fully challenging and thrilling experience.

It’s quite necessary to know the game and understand the difference between both of them before beginning the game.

How to play 101 Pool Rummy at MyTeamRummy?

In this variant, Players have to avoid reaching the Pool of 101. The player reaching the 101 points value will be automatically called off from the game. This game will last till the time all the players on the table except one have reached the value of 101. The one who lasts till the end of the game is the winner. So, in a nutshell, the player has to avoid reaching 101 Pool in order to stay in the game.

If a payer doesn’t find the game in favor or wishes to leave the game, he can opt for the drop option. But it will result in loss of points like for the first drop: 20 points, for the middle drop: 40 points and for wrong declaration 80 points.

And key points to remember for a valid declaration is that a player has to form a minimum of 2 sequences out of which one compulsorily needs to be a pure sequence.

How to play 201 Pool Rummy at MyTeamRummy?

This variant is somewhat similar to 101 Pool Rummy. The only difference is here, the player who reaches the value of 201 has to leave the table. This game goes on till the time all the players except one has reached the Pool of 201. The one who is left till the end is the winner.

The one who scores below 201 Pool is the winner of the game. Players can also leave the game if they feel the need for it. The drop option is there. For the first drop, 25 points are counted, for the middle drop, 50 points and for the wrong declaration, 80 points are taken into consideration.

And most importantly for valid declaration, the player has to form 2 sequences from which one has to be pure sequence and the rest can be any – pure or impure.

Major differences between 101 and 201 Pool Rummy

There are no such differences between the both except:

Hopefully, our description might have helped in understanding the difference between the both.