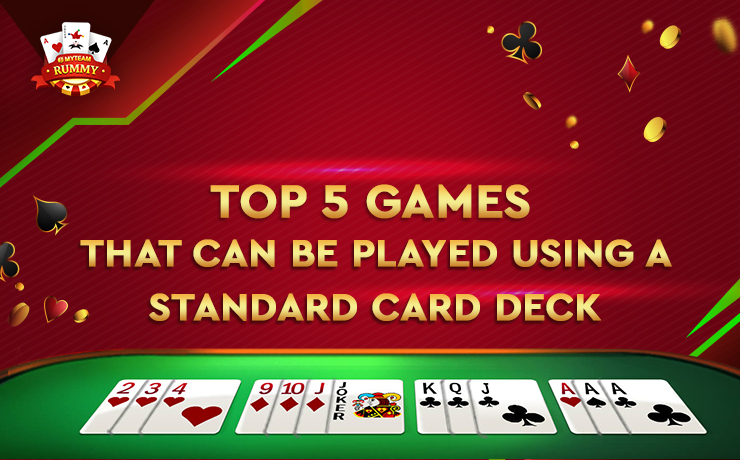 The typical and traditionally played indoor games are always card games. They need a pocket-sized deck of cards which is not so expensive. There are a number of games that can be played using these cards. In India, card games are a part of every family function, summer holidays, and even Sunday gatherings. Standard card deck consists of 52 cards in total divided in 4 suits – Clubs, Hearts, Diamonds, and Spades. Each deck of cards also consists of 2 jokers which can be or cannot be included in a card game. Since card games exist for many years, the number of games with different styles has been evolved with cards. Many of the card games can be played on a community level by groups of people. These games are designed in a way that a number of people can participate in the card games.

Below are some of the card games that can be easily played using a standard card deck.

Rummy is the most famous and challenging game of cards played across the world. It is loved by people on a great level and is popular among online players. Rummy needs to be practiced well in order to master the game. In India, rummy is called as paplu. Rummy consists of the draw and discard moves. It tests your logical skills and you need to have good analyzing skills as well.

Call break is a street card game played in Nepal and other south Asian countries. It is a variant of the game called spades. It is usually played among four players. Each player has 13 cards and there are 5 rounds in the game. A person with the highest score at end of the last round will win the game.

The Rummy game online is mostly played in India and neighboring countries. The catch is that not all cards of the deck are required for playing three-two-five. It requires only 30 cards from the deck. This card game is also called teen-do-panch in India. It is played by 3 players and is a very easy card game. All the cards from 2 to 6 are removed from the deck. Among the four 7s, only the 7s of Spades and Heart are used in the game. The number of hands to be won by each player depends on their position. The person to the right of the dealer has to win at least 5 hands and the other one should win at least 3 hands.

Teen Patti is a game very similar to the poker game of cards. The meaning of Teen Patti is 3 cards. The game is played between 3 or 6 players. The players have to risk a certain amount on hands they wish to play for. It is a blind play or seen play depending on their wish. Everybody stakes their amount and collects it in a pot. At the end of the game, whoever wins, takes away the whole pot.

Hearts is one of the famous card games played with a standard deck of cards. In this game, the lower valued spades have more points. It means the person who has lower spade cards is leading the game. Another name for it is the ‘Game of evasion.’ It is played usually between four players. In this game, the queen of spades has 13 points. So, usually high cards are avoided by players. At the end of 100 points, the player with the lowest points wins the game

Card games have always been the most loved indoor games in many countries. There are special clubs and casinos where people visit to play the game. But with time, many of the traditional things have evolved in a positive way. So is the case with card games. There are many online portals where you can play such card games with players from various countries. Rummy is the most played game. You can start playing online rummy by getting the rummy game app on your mobile phone.